Blood in the Water - Chapter 4 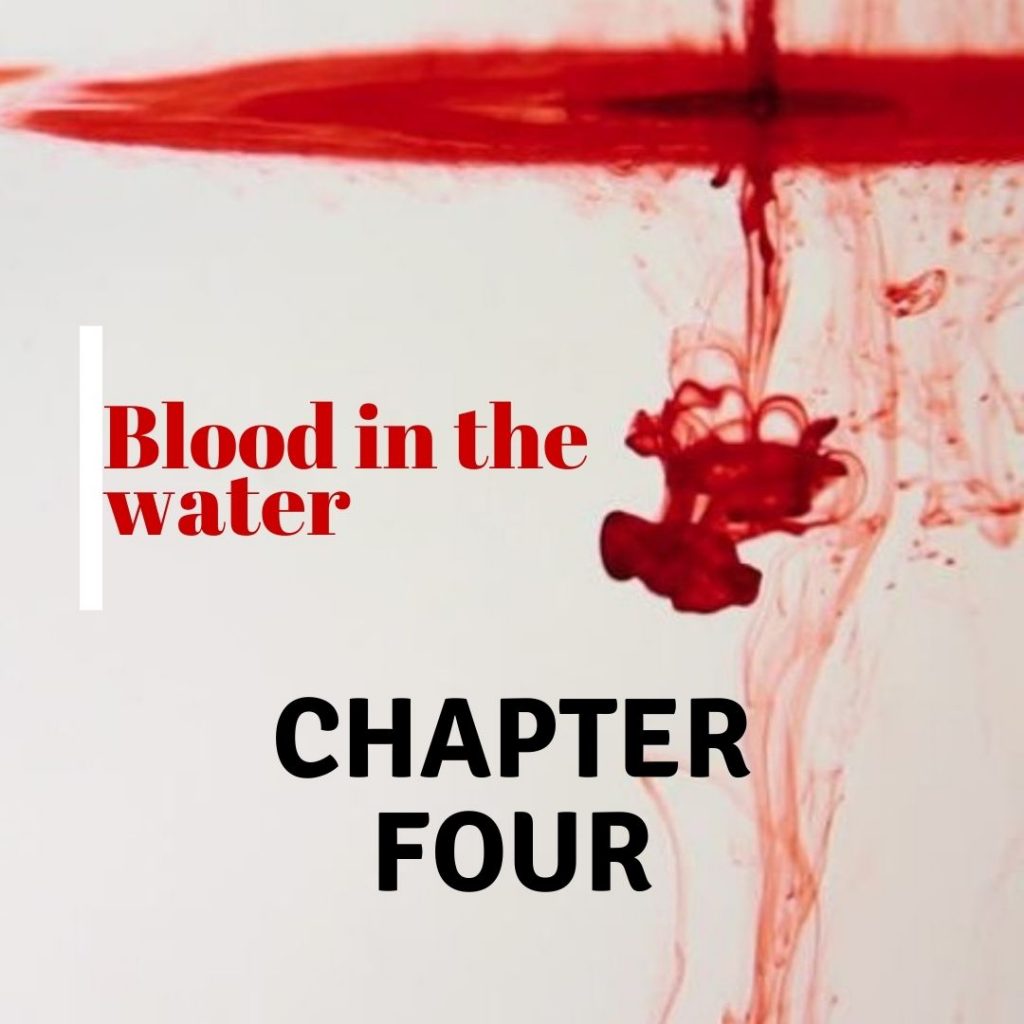 Outside, there was no traffic or bird song or passersby. It was all eerie dark and incredibly silent. By now it was way past midnight- the time in which today becomes tomorrow.

The asphalt on the road was a glossy black, like a wet photograph when Collins opened the door of the car and stepped out urgently.

“Get out from the car all of you” He howled as Tolani and Princewill scampered to get out of the car feeling the tension and the intensity in his tone.

“What is he about to do?” They both wondered.

Collins’ ears still had the dull ringing that got accentuated every time he talked. He took a quick look around the street where the car was parked and he could hear the distant but aggressive bark of a vicious dog.

He wasn’t bothered about anything but the military coming over to arrest all of them for being a security threat. He had to get the car out of there as soon as he could before it turned into an unfolding disaster.

His mind drifted for a moment as he looked at the refreshing lights of early daytime, the streets had the hues of artistic dreamtime, soft yet bold pastels. For that moment the street absorbed the emotions in the air and allowed their breaths the pleasure of the cold Harmattan gust in return.

“I am not going anywhere. You slapped me”

Those words jumped at Collins as he listened to the pain in Bilkiss response.

He walked over to the other side where Princewill was soothing the pain on Tolani head where Bilkiss had tugged on her hair in the car fight.

“Please you need to apologize to her for the sake of peace. We cannot stay here all night and this has to be resolved here and now” Collin was not asking and Tolani could sense the seriousness in his voice.

“Did you hear what she said? Did you” Tolani was obviously not done yet.

“Nobody curses my mother and gets away with it. Nobody! She must be very stupid!!” Tolani took a step closer to be within Bilkiss ear shot.

“Leave me alone” Tolani shot him a vengeful look.

Bilkiss offered a short taunting response in Hausa to which another shouting fit ensued.

“Will you shut up please” screamed Collins with all his strength waving his two arms in the air to reinforce his request.

The car keys flew off it holder and into the pitch darkness on the blind side of the road between the streetlight as he lowered his arm.

“Oh goodness, how worse can this get!” Collins muttered in complete dejection as he goes off in search of his phone. He would need the touch beam to find the car key.

The moment he turned and walked away towards the ditches in search of the lost car keys, the girls lunged at each other as though the fight was a choreographed dance of destruction.

In her rage, Bilkiss was out of the car kicking, yanking and biting at Tolani. The weapons for this fight was their body parts. Aside the occasional yelps and grunts, the girls continued swearing at each other.

Princewill? You ask? He just watched. He was already having a pounding headache from all the drama. All they wanted was some pleasurable evening. How did this turn from romance to a bloody fight in just minutes.

He looked at Tolani- his romantic interest, she was throwing punches in the air like blank bullets. Bilkiss was the stronger one now. And the girls were not letting go of each other.

Collins needed to find the lost keys. If he could find the keys right now, he would run into the car and drive off before they all knew what hit them. He was plotting a quick escape from the imbroglio. If only he could find the bloody car keys.

Now he went on all fours, running his hand into muddied water and wet grasses as he desperately needed to find the car keys before it was dawn. He could hear the labored snorts of the girls as they traded invectives in Hausa.

“What a shame” he muttered to himself.

The barking from the dogs grew even louder now. More dogs perhaps had joined the fray lending their support to the fighters like they were spectators in a dog fight.

Collins was now convinced that they had murdered the silence of the night and it was only a matter of time before they got arrested. That thought spurred him to look even harder for the keys. They had to get away quickly.

He got up on his feet to reprise the swinging of his arm in order to determine the angle the keys must have swung off into. When he looked back at his car, there was still no one in it. He had time he thought.

He looked at the girls, they looked like they were starting to tire. They had separated from each other’s clutch and were now spitting at each other in between swear words as though they were viper.

“Oh dear, they shouldn’t stop fighting yet, I need to find this key” Collins sighed.

Princewill finally made a move to grab Tolani’s arm as her now battered face had slowed her down.

Bilkiss returned into the car, sitting down with one of her legs outside the open door.

“No one is going anywhere until I say so”

She picked up her mobile phone and starts to look through her contacts.

With her speakers turned on so all of them could hear the phone ring, she dialed a contact.

It rang through and was not responded to.

“Where are you right now?” The voice commanded.

She described the location to the accuracy of the street lights. She appeared to be smarter than she looked at that moment. Princewill shook his head as fear gripped him.

“Okay okay. You know it is a bit too early to wake them up at the DSS headquarters. You know what you will do?” The voice waited for her response.

“What dear?” Bilkiss wore a grin, but no one else saw it. Princewill heard DSS headquarters and his throbbing headache quadrupled in intensity. He knew they had to leave that spot right away.

“Make sure no body leaves there before 5.30am. Make sure they are all there when my team arrives”

“Okay. Will do” was her last statement and it was followed by the disengaging tone of a dropped call.

Collins overhead every word as he had approached the vehicle when she started the call. He was disappointed to find that Bilkiss had returned to the car and was seated comfortably in the passenger’s seat.

He had found the keys, but of what use was his hurried and frantic search now that the situation had taken up another dimension.

He walked back towards the other side of the car to see Tolani tending to Princewill at the foot of a tree a few meters away from the car. Princewill was holding on to his lower abdomen in pain.

“What is wrong with him?” Collins blurted out unconcerned as he walked towards the couple.

Princewill appeared to be in pain groaning loudly as he rolled on his side in the dirt.

“He has ulcer pains” Tolani’s voice was burdened with concern.

“Get up my friend, do you think we are playing here? Get up!” Collins was not having any of it.

“What silly theatrics and show of cowardice is this nonsense”

“I am in pains” Princewill groaned

“What stupid pain. Get up this minute, there is no time for this sh*t bro. We need to get out of this place as soon as we can. Suck this up and get yourself together” Collins voice betrayed his fear.

A convoy of 5 cars sped past the street with loud music blaring from their car speakers in frenzied excitement.

“They must have been coming from the same club too” Collins thought as he rued his luck.

Princewill was helped to his feet by Tolani and they sauntered to the car with one arm on his lower abdomen and the other wrapped around Tolani’s neck. They were an awful sight together at that moment.

“Freeze! If you move I’ll shoot”