Blood in the Water - Chapter 5 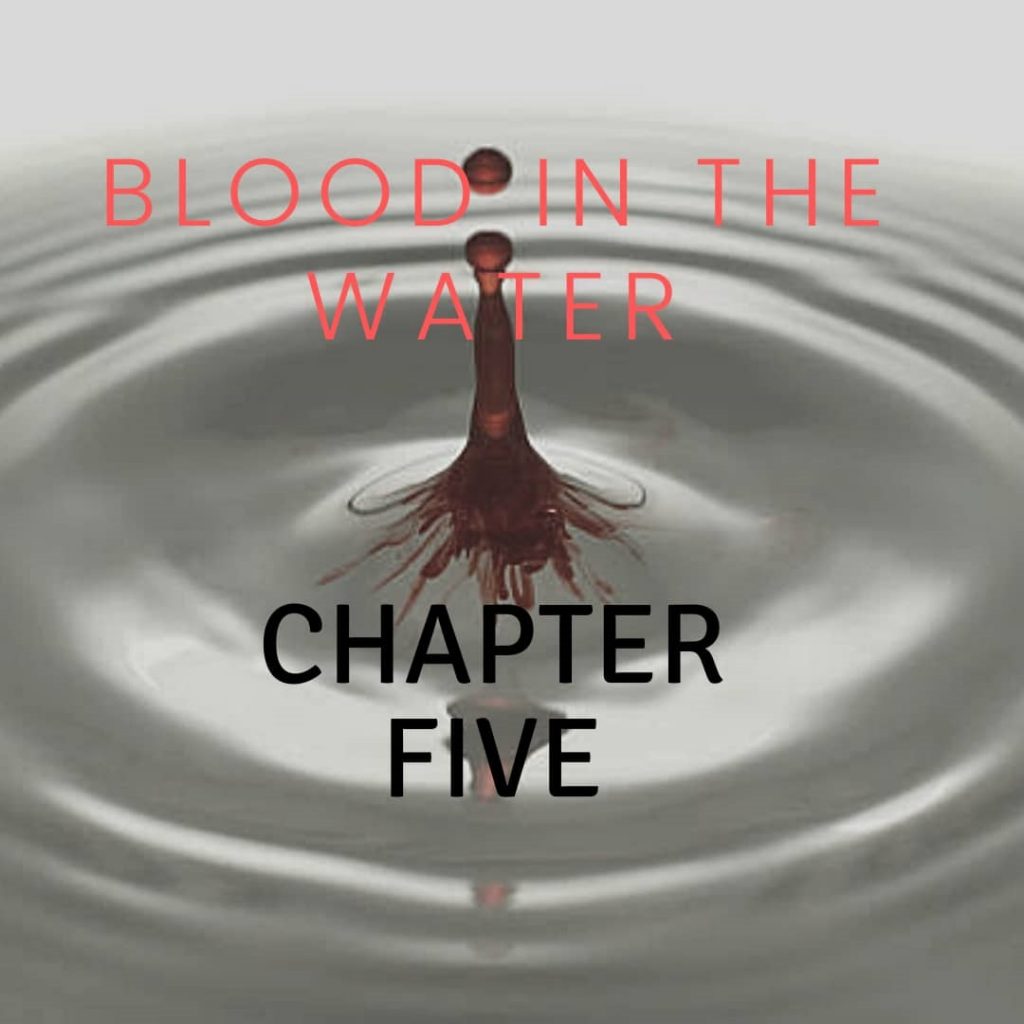 It was the voice of a soldier armed to the teeth with one of his colleagues. They were not joking when they popped out of the dark fringes of the bush nearby. It was as though they were in the battlefield that appeared to be anything but, the players unknowing of their roles and every one of them was the enemy.

Panic stricken and gripped with intense fear Princewill let go of the urine that he had locked into his bladder. The torrents wet his jeans and dissolved into the fine thread leaving a huge patch that one of the soldiers didn’t miss.

“This one has wet himself already” his voice sounded irritated.

All four of them lined behind the car with their hands raised above their heads even when they hadn’t been asked to do so. Collins started to speak first but Bilkiss was faster.

“Excuse me sir, they ganged up to beat me and harass me when…….”

“Shut up my friend! Did I ask you to speak?”

Bilkiss winced like a scared cat. She had assumed wrongly about the mission of the soldiers. She wasn’t the damsel in distress and this was real life and not the movies.

“We have been watching all of you for some time behind that bush there and we know everything that has transpired in the last 30mins. Now since the two of you are hell bent on fighting, you will show me how much fight you still have in you. Bunch of nonentities disturbing the peace of the neighborhood”

Collins was suddenly glad he didn’t have to speak.

“Now both of you move to this side” The taller soldier pointed his weapon at the two ladies beckoning that they move to the other side away from the car.

The two girls reluctantly moved through the line of boys still with their arms up in the air.

“You will both fight until you are tired. Useless prostitutes. When I say “go”, you start!” Even while he spoke the seriousness was not in doubt.

This was no joke.

The two boys didn’t dare turn their heads. They silently wished they could watch the animated fight. But Princewill was having difficulties breathing, fear had permeated every cell in his body and he was frightened to death. He had never stayed within 2meters to a gun wielding man and he feared for his life.

“Please sir” the words escaped Princewill’s mouth without his consent. It came out labored so much that the girls who were on standby to start another round of fight were surprised to hear it.

“Will you shut up there? Do you think by peeing and pretending to have ulcer, we will cut you some slack?”

Time ticked by as time does, neither accelerating nor flinching, for the allotted moment when fight would commence.

A thunderous “Go!” from the other soldier was accompanied by a round of incessant barking from dogs in the nearby properties. The girls lunged at each other again, only this time, it looked more of an embrace than a scuffle. They were already spent and struggling to fight. Bilkiss threw a lame punch into Tolani’s abdomen but was rewarded with an instant slap and kick to the jaw.

Tolani still had a score to settle and she sure wasn’t done. Another quick slap from Tolani caused the boys to turn their heads in wonder. They were hoping that Bilkiss was on the receiving end of that slap. They sincerely hoped.

Bilkiss cried out in pain and refused to continue the fight. She was hurt and drained of energy. The pain from the previous encounters had left her physically disadvantaged. It wasn’t going to be a fair fight. It was beginning to be a scuffle about nothing but the temporary squabble of egos.

Tolani was going to have a field day. Her energy was fueled by her grouse with Bilkiss cursing her mother. She wasn’t prepared to stand back without defending the pride of her dearest mother who was probably in bed somewhere in Ilesha sleeping peacefully. She wore the scars from the fight proudly on her face. She would do it again if she had to.

The soldiers could see the anger etched in her stance as she prepared to throw another kick at Bilkiss who was now on her knees.

“Enough” The soldiers had seen enough and then beckoned to Collins to approach them.

“You and your friends should leave here immediately. Go settle your squabble elsewhere, but leave this vicinity. Is that clear?”

“Good. Find us something fast” he demanded.

Collins dipped his hand into his pocket and handed over wads of clean naira notes into the open palm of the soldier. But the soldier did not move instead he shoved the crumbled notes into his fatigue and opened his palm for more.

Collins thrust out the remaining cash into his open palm again but this time also showing him that his pocket was now completely empty. That was their cue as they walked away disappearing into the dark quietly like they were never at the scene.

Collins attention was drawn to a crying Bilkiss. Muffled cries soon turned to wailing and open cry for help.

“Get in the car lets go” Collins motioned to her softly.

“Go where? We are staying here till morning” she blurted out

Collins looked at his watch – it read 4.03am. His heart skipped a beat. If the DSS agent arrived at the scene he would be in a lot of trouble. And his life would be at risk.

He squatted next to Bilkiss and helped her into the passenger seat. But she won’t allow him shut the door. She stuck her leg right outside to stop him.

Collins walked over to the driver’s seat to continue pacifying Bilkiss who was now crying unabated. The alcohol was starting to wear off and the burning pain from the bruises and several blows she had received throughout the night had taken its toll on her.

Bilkiss was not ready to leave the scene until her DSS friend made good his commitment to send his boys over. All she had to do was to stall for the next one hour. Collins on the other hand had just one hour to convince Bilkiss to leave the scene.

When he tried to put the car key in the ignition, Bilkiss sprang from her seat to hold his wrist in a firm grip leaving him in no doubt that she meant business.

He looked at her and saw nothing but pure rage. This was tougher than he had thought.

On his side, he heard the rumble of a motorcycle engine right beside his car and to his amazement the occupants were Princewill and Tolani. Both of them seated comfortably on the pillion behind the rider as it revved into the empty street.

As the bike sped away, Princewill promised to call his dear friend whom he had now left in a lurch.

“I’ll call you” he said as his voice was lost in the wind.

Chapter 6 is up next