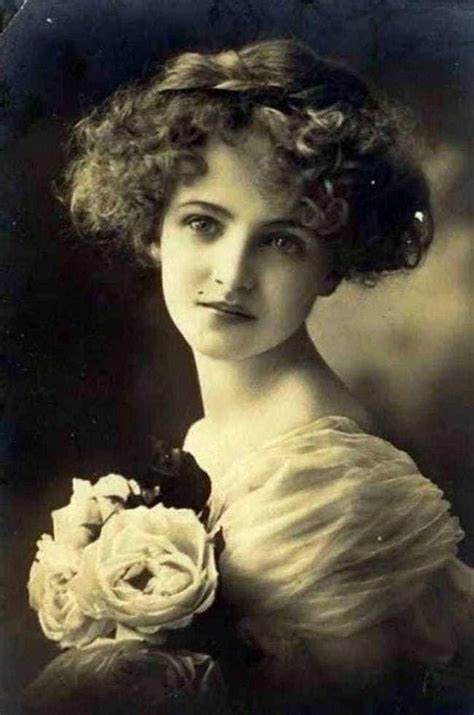 “Through loyalty to the past, our mind refuses to realize that tomorrow’s joy is possible only if today’s makes way for it; that each eave owes the beauty of its line only to the withdrawal of the preceding one”

On 23 May 1901, the “Paris Attorney General” received an anonymous letter full of scribbles, claiming there was something strange occurring at the Monnier’s address.

Now the Monniers were a popular French socialite family that was well-respected, yet considered a conservative bourgeoisie family in Poitiers of old noble origins.

Madame Monnier had won several awards which included one special award from the Committee of Good Works, for her generous contributions to the city. They weren’t one family to mess around with.

But the allegation in the note delivered that morning to the head of the French Police were very serious that it had him jumping out of his office chair spilling his morning coffee.

In his entire career he had witnessed a whole lot of gruesome and criminal police cases but never one as intriguing and unbelievable as the one he just read through the tiny rims of his glasses.

In barely legible writing it read;

Monsieur Attorney General: I have the honor to inform you of an exceptionally serious occurrence. I speak of a spinster who is locked up in Madame Monnier’s house, half-starved and living on a putrid litter for the past twenty-five years – in a word, in her own filth. 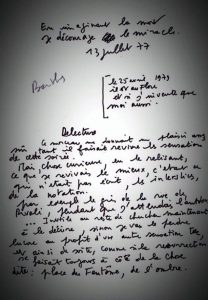 A quarter of a century!!!

Someone took 25years to consider and decide whether to snitch on the family!

The note even claimed they could hear screams coming from a closed window inside the house.

At first, the head of police thought that was quite unlikely. This was because they knew that their once very beautiful daughter had passed on for several years and there was no chance there was anyone else in the house aside Madame Monnier, her brother and their servants.

Perturbed and disturbed, the head of police thought deeply about how to approach the case conscious of the Monnier family’s sterling reputation. He decided that the least the police could do was to at least verify that the claims were false. Nothing more.

Her Rescue
A team of police were promptly dispatched to the Monniers family estate to investigate, and when they knocked on the door, no one answered, even though they could hear movement from the inside, and see the flutter of curtains moving as Madame Monnier peeked out the window and ignored the door. 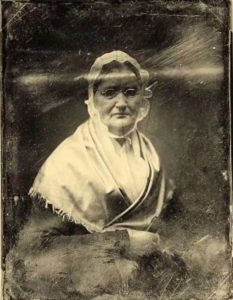 They decided to break in, and started a careful search through every room in the expansive house for this captive woman.

Interestingly, when the police were raiding her home, Madame Monnier was sitting in her living room, completely calm and unmoved. Perhaps even sipping coffee.

In an upper room of the house, the police noticed a padlocked attic door. When they removed the lock and flung it open, a horrifying stench filled their noses. Piles of feces and vomit blanketed the floor.

On the bed was an extremely malnourished woman on a rotting straw mattress squinting through the light which she hadn’t seen in 25 years.
There, they found the now 50 year old Blanche Monnier looking like a skeleton, smelling of her own waste.

Crumbs of food and bugs were all over the floor. The smell was so bad, the police officers didn’t want to go inside to investigate.

She was totally naked, and she hid her body and face under her blanket, because the sunlight was too much to handle. She was terrified and completely deranged.

She only weighed 55 pounds! 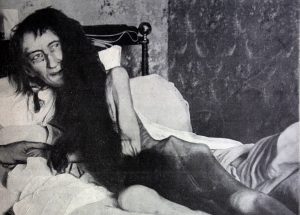 One of the police officers wrote in his statement,

“We immediately gave the order to open the casement window. This was done with great difficulty. The old, dark curtains fell a heavy shower of dust. To open the shutters, it was necessary to remove them from their hinges.”

Another policeman described the state of Monnier and her bed thus;

“The unfortunate woman was lying completely naked on a rotten straw mattress. All around her was formed a sort of crust made from excrement, fragments of meat, vegetables, fish, and rotten bread… We also saw oyster shells, and bugs running across Mademoiselle Monnier’s bed. The air was so unbreathable, the odor given off by the room was so rank, that it was impossible for us to stay any longer to proceed with our investigation.” 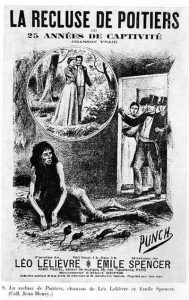 You must be wondering why she was locked up for so long in her own home?

What led her mother to lock her in such horrid conditions?

Blanche was renowned for her physical beauty, and attracted many potential suitors for marriage. Like every other French socialite in 1876, Monnier was desperate for love. At 25, she was still unmarried and was desperate to move on with her life out of her mother’s home. There, she found love in the form of an older lawyer.

But her mother disapproved of the relationship stating that her daughter would not marry a penniless lawyer.

Still, Monnier’s heart was dead set on marrying this man, regardless of her mother’s wishes. That was her mistake though, as a vicious argument ensued. Madame Monnier forbade Blanche from seeing this man, and even went as far as to beg her to call off the relationship. But Blanche refused.

From there, Madame knew Monnier would never give up her emotions on her own for this man. So she locked her daughter in the tiny attic room, with barricaded shutters preventing any light in the room. If Monnier wanted freedom, she would have to break off the marriage to this penniless lawyer her mother disapproved of.

But Blanche was in love, and even if that meant never seeing her love again, then she wouldn’t. Monnier stayed in the room, eating dinner scraps her mother would give her, and sleeping on a hay bed left upstairs. As Monnier laid captive in that tiny attic, she truly did never see her lover again, as he passed away in 1885.

To conceal their dastardly act, they faked her death. In the public eye, Blanche Monnier was a dead woman, who her mother and brother would mourn at every chance to sell their story. None of her friends knew where she was and accepted that she had passed on. Of course, no one doubted her death, as a young woman passing away unexpectedly was no raise for concern.

Her brother was also manipulated by their mother, as well into his 50’s he was still at home. He never married, and stayed in the home with their mother, not questioning the situation with Blanche one bit. 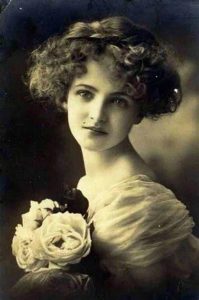 Blanche was immediately taken to the Hotel-Dieu Hospital, and doctors thought she was going to die because she was so thin.

The nurses gave her a bath, and she kept saying how lovely it was to being clean, and how thankful she was to be free. It was still difficult for her to be in the sunlight, because of her sensitivity. Breathing the clean air while tucked in her hospital bed, Blanche sighed cheerfully, “How lovely it is.” 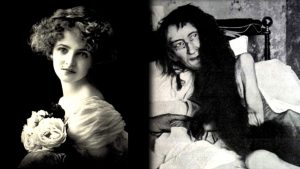 Blanche told authorities that her mother had locked her up when she insisted on marrying a relatively unsuccessful lawyer Madame Monnier was not particularly fond of. Her mother planned to lock her up in her room until she agreed to break off this romance.

Her brother was still living in the house with her mother at the time of their arrest and it appeared that he was also manipulated by his mother who prevented him from moving out and having his own life, even when he was well into his 50’s.

But he tried to claim that Blanche brought this all upon herself. When he and his mother were brought to court, Marcel testified that Blanche was an angry woman who was full of rage. And that they believed she was mentally ill. He said that only a crazy person would choose to stay in solitary confinement over agreeing to break up with someone, and this was why they kept her locked up.

They figured that she must be crazy, and deserved to be imprisoned. He also tried to claim that she never even tried to escape the room, and that after they locked her in there, she simply accepted her fate and decided to stay.

His statement did not hold much when police investigators explained that an entire group of police men had to work together to take down the shutters from the window, and there was no way the weak and starving Blanche could have done that on her own.

Neighbors came to testify at the trial, claiming that they thought they could hear the screams of a woman shouting “police!” out of the blocked window. This is most likely where the anonymous letter came from. Someone probably noticed the screams that continued on for 25 years.

Her mother was found guilty of her crimes, and she was sent to jail. But she was so old, she died only 15 days after her capture. Her brother was given a sentence of a year in jail, but he was a lawyer, so he knew how to protect himself. He appealed the charges, and was able to go free. 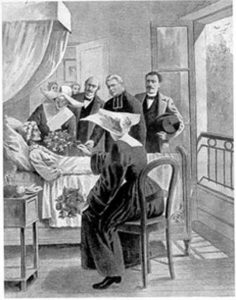 Blanche was able to put on some weight at the hospital, but after being in solitary confinement for 25 years, they say she had lost her mind. She also had nowhere else to go. She was already 50 years old, and could not very likely find a husband and move on with her life. She was sent to live in the Blois Psychiatric Hospital, where she died in 1913.

Some afterthoughts
It’s not certain who sent the attorney general the anonymous letter, alerting them to Blanche Monnier’s imprisonment. Some suspect it was Marcel Monnier, knowing that his mother would soon die and he would be named Blanche’s caretaker. (He could then possibly be charged with abuse.) There is also the possibility that a soldier who was a lover of one of the housemaids wrote the letter, seeing her condition and having no loyalty to the family. Whoever it was, they saved the life of Madmoiselle Blanche Monnier.

Looking back, some people also debate whether Blanche Monnier was truly insane or not. After all, she could have lied to her mom for the sake of getting out of the room, and then she could have taken off with her boyfriend.

Others believe that she was perfectly sane before going into the attic, and the solitary confinement drove her to become insane in the dark. There have been studies to theorize that Blanche was showing signs of bad behavior long before the incident, but much of it could be chocked up to teenage angst and rebellion. 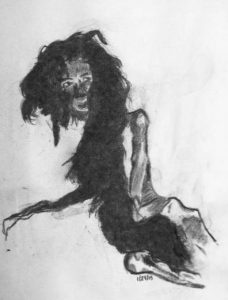 What do you think?

Clearly the punishment was a tad too much for defiance, but was Blanche too laid back or was the love worth the sacrifice?

14 thoughts on “Beauty in the Attic”