Blood in the Water - Chapter 7 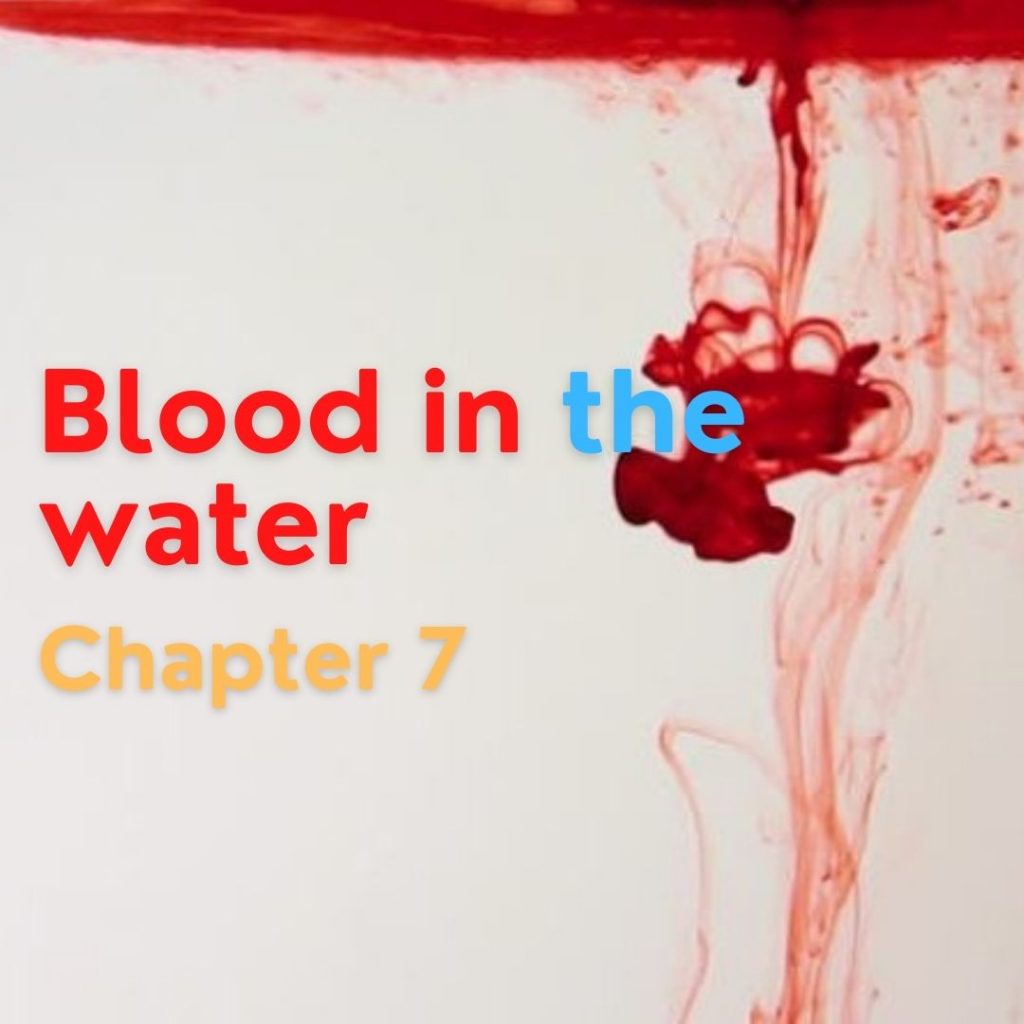 The hallway into the rooms at the motel had as much personality as the reception. The floor was slate grey and the walls dove.

Above, the ceiling was made from those polystyrene squares laid on a grid-like frame. There were commercial prints on the wall, tasteful, but in a dull kind of way.

The walls were once painted, Collins could tell from the cream flakes that remained, though mostly showing the grey undercoat or perhaps the concrete beneath that.

There was nothing fancy in the motel; it was low budget all the way, dull and spent.

The floor was uneven, from so much traffic of both human feet and cart wheels from the room service, that walking wasn’t much of a pleasant experience.

Above every door in the corridor was a large plastic sign, dark with white lettering- no fancy fonts, just bold and all-caps. He followed the numbers with his eyes as he walked on till he found “ROOM 307”.

When he opened the room, the stagnant air found an outlet, but not before his nostrils took an instant hit. It was everything but pleasant.

He turned the lights on, squinting briefly to discern shapes and images as color returned to the once dark room. His eyes darted around the room till he was convinced it was comfortable enough for Bilkiss to stay in.

He thought he perceived the smell of dried sweat from the previous guests and irritating smell of wet towels competing with stank remains of mildew on the walls. His nose tingled.

The bed lay against the wall with old table lamps on either side, while a reading table and chair shared space with the 32 inch television and an old threadbare couch at a corner of the room.

Collins could hear the sound of dripping water from the toilet even with the door closed. But he wasn’t looking out for perfection, all he wanted was a breather. Afterall, she was only staying for half a day.

“I will take this one” He announced facing the receptionist who had accompanied him to the room.

His mobile phone rang out suddenly with the shrill sound startling him enough to quickly slip his hands into his pocket to retrieve it. It was Princewill.

He looked at the phone screen for several seconds as though deciding whether to answer the call or not.

He wondered what the call was about.

“Yes?” He answered with disgust.

“Where are you buddie? I got some gist for you” His remorseful voice announced over background static noise of a dreadfully poor network.

“Meet me up at the “Cassandra Motel” down Shehu Yar’adua Avenue in 20mins” he ordered, terminating the call almost immediately.

Bilkiss held on to Collins’s arm as he eased her into the bed in the room he had just paid for. She still felt drowsy from the medication prescribed by the Pharmacist. She could barely keep her eyes open as she mumbled incoherent words before letting out a loud yawn as her shoulders slouched.

A second yawn and her eyes shut the moment her head hit the pillow right before her body became floppy while still fully dressed. Her shoes were still strapped on her feet.

Moments later a snore escaped her slightly opened mouth as she started the full sleep cycle.

Collins carefully removed her shoes and placed them on the floor next to the bed. Her bag and other personal effects were still in his car outside as it would have been a handful carrying all of it when he helped her to the room.

He sat next to her on the bed for a few minutes before heading out of the room to get himself cleaned-up and refreshed.

The crowd had now dispersed completely and Bilkiss looked at Collins seductively as he walked ahead of her back to the room.

“You look handsome in those shoes boo” she teased.

Collins walked on to the room without acknowledging the compliment. She was causing him more discomfort than he had imagined especially with the drama she started earlier that morning. How else does she want him to show his remorsefulness?

When he opened the door into the room he couldn’t but notice how it was bathe in the hues of morning sunlight with the brightness hurting his eyes. It was hard to make out the details of the room after the morning light outside. When his eyes were adjusted it was the scent of her perfume that had dominated the room as air circulated even better with the open windows.

As soon as he shut the door behind them, Bilkiss wrapped her arms around his waist right from the back. He sure wasn’t in the mood, but he had seen this same girl lose her temper and this wasn’t the time to upset their new found friendship. He turned around slowly to face her as he tried to disentangle himself from her feeble hold.

“You smell nice” she sniffed.

“Not now Bilkiss” he protested

“But I want you now” she whispered with lust written all over her pretty face.

“You are in no shape to have sex. You need to rest” Collins replied weakly.

“But I have rested some and I feel hot. I want you already” She whined and started to unbutton his shirt.

“Okay then. Why don’t you go have a shower and maybe…….maybe…I will change my mind” Collins suggested.

“You had better” she smacked as she knocked off her shoes pronto as she peeled every piece of clothing from her body.

There wasn’t much to remove though, but she made sure Collins got an eyeful of her luscious body before hurrying into the bathroom shutting the panel door behind her.

He eased himself into the old couch in the room as he started to wonder if he could sustain an erection long enough when Bilkiss steps out of the bathroom after all he had been through.

He started to loosen his belt as he knocked off his loafers with both his feet.

First he heard the tap water running in the bathroom as splashes of water hit the tiled floor repeatedly followed by her sonorous voice singing happily through the burble for a few minutes before he heard the unmistakable thud of flesh and bones hitting the tiled floor like a sack of onions. He wasn’t sure if he heard right though. The last he heard was a sharp yelp and a short cry.

He listened intently not sure what to think. The tap water was still running even though the singing was conspicuously absent.

He feared the worst.

“Bilkiss” He called out from the couch to douse the maddening fright in building in his chest.

He jumped to his feet quickly taking giant strides into the bathroom as he pushed the door opened violently with his knee.

Bilkiss laid down on her side as still as death barely breathing with her eyes half opened. She had slipped and fell hard, hitting her head on the sharp edge of the tiled floor.

Colour drained from Collins’ face immediately. It was as if his heart had suddenly stopped beating and all the blood had run down into his feet.

But the most worrisome was the flowing crimsoned red blood that was washed away steadily into the floor drain by the water torrents. There was a lot of blood.

It felt like his innards were being replaced by some kind of black hole as his panic stricken hands started to shake violently.

He bent double to help her up, but her body was limp and heavy. The water was still splashing from the shower and it rained darts of water pellets rapidly into his cloths. He steadied his hands as he managed to check her pulse.

Counting under his breath, he soon realized, there was none.

She felt even heavier as he tried to move her. The blood wasn’t stopping and the splatter had started to discolor the lower part of the white wall tiles of the bathroom.

“Wake up Bilkiss. Wake up please” his voice quivered as it dawned on him that she may have already passed on.

Nausea crept from his abdomen to his head and the world was starting to go black. He was finding it difficult to breathe.

“Bilkiss” he called her name again.

“Jeez” he dropped her on the tiled floor and then turned the tap off. He was half drenched in water and her blood was on his hands as he turned his blood stained palm upwards in horror.

Red colored crumpled toilet paper were tossed one after the other into the toilet bowl as he avoided looking at the corpse of his date the night before.

He cleaned every bit of her fluid off his fingers before he flushed the water cistern.

That was when he summoned the courage to look at her corpse as tears started forming at the corner of his eyes.

He knew he was now in big trouble.

Then a mobile phone rang from the room. His ears twitched. It was the ringtone from a sad Sam Smith’s song validating the eerie mood in the deathly room.

He froze for a moment taking it all in until the phone rang the second time before he dashed into the room to answer it.

Before the meaning of the caller ID hit him, his phone started to ring.

It was Princewill calling. He was probably already at the motel.