Era of Mediocrity - by Abidemi Adebola 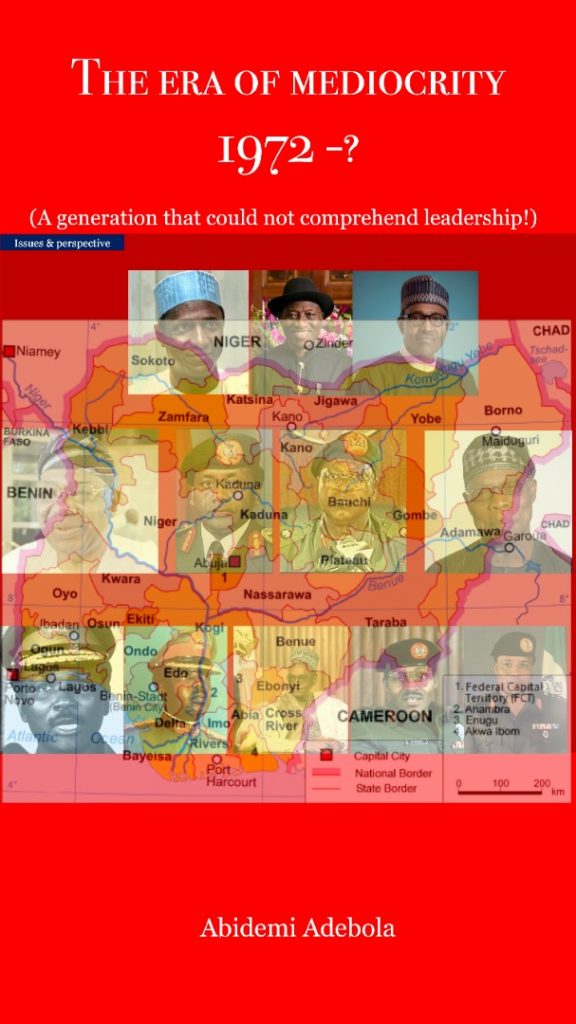 “A generation that could not comprehend leadership!”

May it never be that the golden era of politics for Africa was the Pre-independence era, when we had politicians like Julius Nyerere, Chief Obafemi Awolowo, Kwame Nkrumah, Augustino Neto, Patricia Lumumba, Kenneth Kaunda, SekoTaoure, Jomo Kenyatta, Silvius Olympios and the likes.

In Nigeria, Chief Obafemi Awolowo, Herbert Macaulay, Aminu Kano, Tafawa Balewa, Nnamdi Azikiwe are still the most outstanding statesmen and politicians we have ever produced.

How come Nigeria has found herself captained by people who do not understand the purpose and use of power? For so long Nigerian has been led by “Babies”. Men who have no sense of history, no inclination for greatness, no penchant for sacrifice and selflessness, men without vision and men without honor.

Nigeria has not only held herself down, but she has held Africa and the black race down too. How can a nation shouldered with the weight of destiny and fate of the entire black race be led by short-sighted and small-minded people?

History could not have been much unfortunate than the calamity that befell Nigeria!

The long-awaited hope for an African Renaissance predicted to be led by Nigeria is nothing but an illusion. Nigeria dwindles in mediocrity, she cannot help herself. As a matter of fact Nigeria has become a huge monster to herself!

1944-1960; was the period of the struggle for the decolonization of Nigeria.

1967-1970; berth a civil war that was supposed to settle the National identity crisis, but it couldn’t, rather it intensified the national confusion.

1971- 1983; corruption, tribalism, religious bigotry was formally institutionalized in the country.

2000-? ;Poverty and corruption is no longer a political crisis, it has turned to a social cultural crisis. The baby boom of the ’80s and ’90s have produced a generation that has evolved in the socio political and economic disaster planted between ’83 and 2000. They now co-exist alongside the old forces that has kept Nigeria down for too long.

This generation are products of leadership decay and National mediocrity. Anytime from Now this generation will have open confrontation with what the concept of  Nigeria stands for.

Nigeria is a country of different regions facing different Directions. We have a Northern region whose dearest aspiration is to be a Niger Republic/ Afghanistan/Islamic village within Nigeria.

We have the South-Eastern region that is bent on actualizing the independence of Biafra.

We have the South-South region that is seeking to control her oil and lavish her wealth as she deems fit.

We then have the South-West region that believes she has inherited one of the largest economy in Africa but is deprived of innovation and expansion by the idea called Nigeria.

How does Nigeria reconcile all these values together?

Either Nigerians believe it or not, there is a battle ahead. One might not be able to predict the form or nature it will take, but these values are spiraling on a collision course, and at a point, like a bubble it will burst. The situation  cannot be managed forever, the same reasons Nigerians could not tolerate colonization for too long is the same reason why a new generation will tear down the present system.

Like other endeavors in the world, Leadership itself is a skill. The ability to take power and to lead efficiently is a skill that any generation must have. Or else we will always have a dysfunctional state. Nigeria is full of power mongers who don’t fit into the idea of leadership in any form!

The greatest opportunity Nigeria had to re-invent herself was after the civil war. But the leaders failed to learn from the past, they continued like cankerworms eating deep into the very foundation of the country. Now they have eaten up the foundation, the house is about to collapse!

Nigeria is more of an unanswered question than a country? There is no easy way out, we need to make tough choices and hard decisions before we can get it right. We must defeat the past; the past has held us down for too long.

What then is in Chairman Mao that is not in General Gowon?

What is in Lee Kuan Yew that is not in Ebele Jonathan?

What is in Nelson Mandela that is not in Olusegun Obasanjo?

What is in Fidel Castrol that is not in Ibrahim Babangida?

When you compare outstanding leaders to such leaders we have in Nigeria one can readily see the gap.

Contemporary Nigerian leaders lacks a sense of history, an acute sense of responsibility, lack of instinct for greatness, half education or poor education, lack of ideology, lack of inspiration, lack of attention for details, inability to see the big picture, lack of vision and smallness of thinking.

Today power mongers are everywhere in Nigeria but they are too empty, not just empty, but empty to the bottom; empty of ideas, empty visions, empty statesmanship, empty nationalism, empty of all that matters to civilization even empty morality!

It is because the Foundation of Nigeria is faulty; Nigeria has no founding fathers!

The idea called Nigeria was founded by the British, therefore the natural allegiance benefited by other nations of the world, like Britain, Germany and France does not exist.

Yes, we had leaders who struggled for our independence, but the truth is that most of the leaders, which were representative of their people (a nation in their own right), never got what they wanted.

The independence conference of 1957 produced what the British wanted and not what the indigenous leaders wanted!

For the sake of independence, a genuinely independent nation was not formed. Instead of a country, we now have indigenous people presiding over a colonial structure.

Till this very moment, Nigeria continues to struggle with fundamental issues that should have naturally been resolved during the emergence of the Nation itself. Issues like; Unity, Economic structure, The role of religion in the society and National identity.

Nigeria got independence 60 years ago, but at this very moment and this very hour Nigeria is struggling with foundational crisis.

A nation is destiny, a nation is greatness, Nigeria is a country but not yet a Nation!

What makes a country is beyond a flag, a standing army, currency and government.

A genuine nation is formed in the heart of men and if you think this is not true, ask the Jews, The British, the Russians or even the Americans. they will tell you that their nation is their movement, their soul and their existence.

These little-minded men who had the opportunity to mould a nation but grounded it, have no role in history.

A very obscene point will be their reserve, because the generations to come will look back to consider them the worst moment in the history of the black race.

Within the last fifty years Nigeria fell from one of the most promising country in the world to the poverty headquarters of mankind.

Nigeria grounded the hopes, aspiration and energy of six generations.

Within fifty years Nigerian leaders looted far more than what the colonial masters took away.

These little-minded men have grounded the ship and the only island available is the revolution.

When we talk about the revolution, many people think of an armed intervention, not that it doesn’t look like it, as a matter of fact all the indices points in that direction because the war of 1966-1970 was inconclusive rather it continued silently economically, politically, institutionally and culturally for another 50 years and we are still waging the war till this very moment.

The revolution is when the critical few are ready to take responsibility for the destiny of Nigeria and are willing to stake their lives for the principles and ideology of greatness and purpose.

No one can predict for sure what the Nigerian revolution will look like but it is inevitable. In the end mediocrity swallows itself until it burst from inside.

Nigeria is at this point of history.

My First Published Book – Prisoner of Fate Cheers!! Today is the first day of

Where did love go? – the thin line between love and hate

Where did love go? – the thin line between love and hate To love is

Why you fart so much – Dr. Kbaba

Why you fart so much – Dr. Kbaba Excessive abdominal Gas, So Gassy so Farty

Where did your confidence go? – Let’s find it

Where did your confidence go? – Let’s find it I lost my confidence on the

The Vagaries of Sleep – tips to sleep like a baby

I am still 29 – my mid-life befuddlement

Do we thrive on Schadenfreude?

Do we thrive on Schadenfreude? ” To feel envy is human, to savour schadenfreude is devilish”

Life is fickle – time is unforgiving “How strange life is, how fickle! How little

Bonnie and Clyde – what history holds

Who needs Motivation? – a blast from the past I stumbled on a copy of

Corporate email etiquette – 20 rules you must know In the corporate world, email is

The day a meteor hit Russia

The day a meteor hit Russia Ever heard about the Chelyabinsk meteor? A few weeks

3 thoughts on “Era of Mediocrity”