The Crow and the Eagle 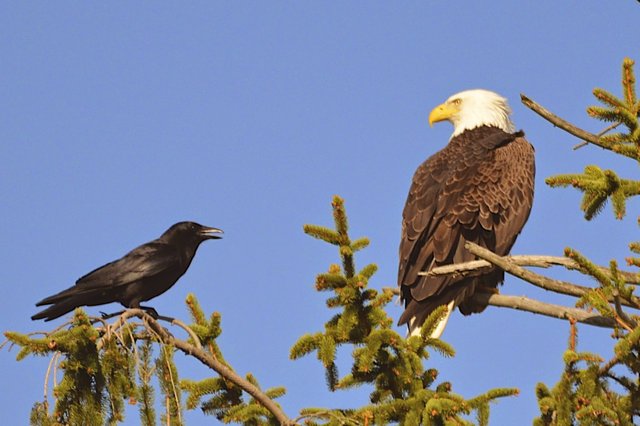 “Be yourself because the original is worth more than the copy”

I read this story a few years ago and searched frantically for it online recently so I can share the lessons in its simplicity. I am hoping that it made you realize just as it did way back to me, that we must all run our own races and stop the needless imitation.The story is the first of a two-post series on the Eagle.

It was a bright spring day. The sun was high in the blue sky. A herd of sheep was grazing contentedly on the hillside. The little lambs with their soft white coats and curly tails were playing among themselves. The Shepherd, seeing that his flock was safe and happy, had fallen asleep under the spreading branches of a large old tree.

Suddenly an Eagle swooped down from the sky. It pounced on a little lamb and carried it off so swiftly that none of the other lambs even had the time to bleat. The sleeping Shepherd heard nothing.

A Crow was sitting on the tree under which the Shepherd lay asleep. He had seen how the Eagle had caught the lamb and carried it off to his nest.

‘What a wonderful way to get dinner!’ he thought. ‘Why do crows look for old smelly food?’

The Crow decided to do exactly as the Eagle had done. It had looked easy enough. All he had to do was to decide which sheep he wanted, swoop down upon it, hold it as firmly as he could in his claws and fly off with it… Easy!

If the Eagle could do it, then so could he!

The Crow looked down at the flock of sheep to decide which sheep he wanted.

Just below the tree, by the Shepherd, a big, old Ram was grazing. He had curling horns and a thick heavy fleece.

‘Aha! He should be a good meal for me!’ thought the Crow greedily. He was very hungry and the thought of a large juicy ram for lunch made his mouth water.

The Crow swooped silently and swiftly down onto the Ram, just as he had seen the Eagle do and grasped it firmly by its fleece.

‘And now to fly off with it to my nest,’ said the Crow to himself. He flapped his wings with all his strength, but could not lift the Ram.

The Ram was large. He was much too heavy for the Crow to carry. The Crow tried again and again, but without success.

The Ram felt the Crow on its back and was most annoyed. Just what do you think you are doing, you pesky bird?’ he snapped, glaring at him over his shoulder.

The Crow flapped harder still, trying to carry the Ram away.

‘Now stop that!’ cried the Ram. ‘Go away! Shoo! Leave me in peace!’ He jumped and bucked and tried to shake the Crow off his back.

‘Oh oh!’ thought the Crow, alarmed at the Ram’s fierce antics. ‘Maybe this wasn’t such a good idea after all! Perhaps I should look for my dinner somewhere else! I had better let the Ram be!’

The Crow tried to fly away, but he found he could not move. His claws were caught in the Ram’s thick fleece! The Crow pulled his feet this way and that. He flapped his wings as hard as he could. But no matter what he did, he only seemed to get stuck more firmly.

Oh, how was he ever going to get free? The Crow squawked loudly in fear and despair. The Ram started running around the tree, bellowing with rage. The Shepherd woke up with a start. Who was making that horrible noise? Were his sheep in danger? He sat up.

What a sight met his eyes! The Ram was running round and round the tree. On his back was the Crow, squawking and trying to rise into the air.

The Shepherd began to laugh. At last, wiping his eyes, the Shepherd stood up. He stopped the Ram as he ran by and calmed him with gentle words.

When the Ram was still, the Shepherd took a pair of shears from his sack. Holding the Crow with one hand, he deftly snipped the fleece until the Crow was free.

‘What did you think you were doing, my fine friend” asked the Shepherd, looking at the Crow. ‘Playing at being an Eagle, were you?’

The Shepherd burst out laughing again.

The Crow was too embarrassed even to croak. He wished only that the Shepherd would let him go so he could fly away to his nest and hide his foolish head.

Finally, when the Shepherd let the Crow go, the Crow flapped his wings and flew off as fast as he could.

‘And the next time you want to be an Eagle, make sure you pick an animal your size!’ called the Shepherd after him.

The Crow, feeling silly and foolish, promised himself that from now on he would only do as other crows did!