How I redesigned access gates into fuel stations in Nigeria. - Innovation at its best 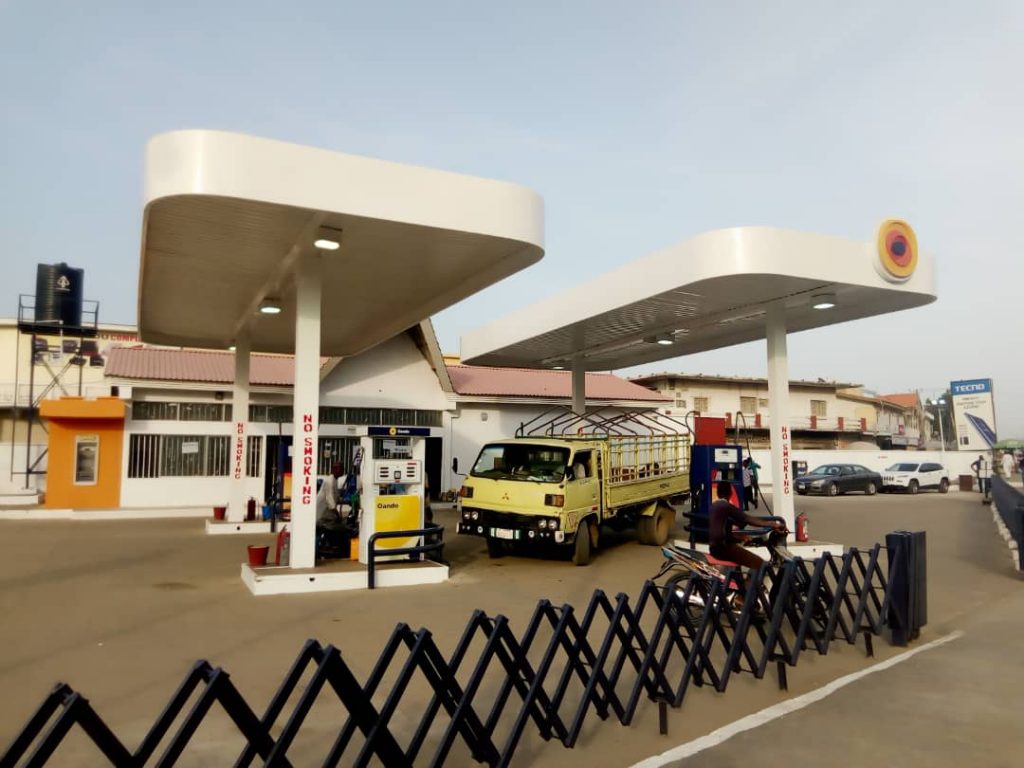 “Every once in a while, a new technology, an old problem, and a big idea turns into an innovation”

T he oil and gas downstream industry in Nigeria is plagued with a plethora of issues from low margins to government interference in the market dynamics laced with political undertones.

The major marketers (the big names you easily remember)held sway for many decades in the market until the last few years when their overheads appears to have gotten the better of their bottom line amongst other financial related issues.

A lot of the current retail fuel station design in the downstream industry of Nigeria has been the same for many decades. Stations look the same way, even after extensive upgrades have been completed on them. Most of the upgrades attempt to renew existing designs rather than upending and disrupting the existing models.

Recently, a few downstream marketing companies have taken up the challenge to redefine how a retail station should be perceived by customers. They have invested in solar panel roof designs, eclectic colors to sway customers to drive into their stations.

They have also developed better and imposing totems (Station road signs) with LED price displays and catchy designs to increase footfall to the stations. Some have created a thriving non-fuel related business within the same property to change the perception that fuel stations are drab places.

One way or the other, it has now become necessary to get customers to spend more time in the fueling station. Not just buying fuel, but carrying out other businesses.

Typically, customers often drive through fuel stations to refill for gas and promptly drive off to face the surging traffic. Unless they have come specifically for other products they are unlikely to notice a lot of the branding efforts displayed to get a bit of their attention. This would mean that traditionally, a good chunk of customers spend a very short period of time in the fueling stations.

One area that appeared to be overlooked in the redesign effort was the entrance and exit gates into the retail fuel stations. For many decades the metal barrier that restrict movement into the retail station during operations and closing hours or during the fiercest fuel queues in the not-too-far-gone era of fuel shortages can be best described as simple, medieval and outdated.

The metal gates were generally of short height with steel roller wheels to allow it move on the concrete pavement and to fold at determined angles inward or outwards to the entrance or exit perimeter. The gates had typical metal frames made from hollow steel pipes welded together at both ends and along adjoining joints to form a heavy steel contraption designed to restrict access into the filling station.

The gates were often very heavy and required more than one person to push or pull till it was completely stretched out or retracted.

See samples in the pictures below; However the problem with the gates was not just its distended weight, it also had a major design flaw.

The entrance and exit ramp into fuel stations mostly had an uneven and steep slope which burdened the gates at its joint causing it to rip off at the stubs while opening and closing. More often than not, these gates were reputed to fail every other month depending on the intensity of use.

Those gates could have remained the same forever, no one paid heed to this design flaw. No one cared to fix it and there was no where else in the world to copy a design from!

As with many of our retail station designs, in Nigeria we relied heavily on borrowed ideas. While that itself isn’t a bad idea, it always meant that we had to adapt it to our own context. This we didn’t often do so well.

We simply adopt a design and grapple with its operational issues as we use them.

The deficit was in us applying our God given talents to create and proffer solutions to our own peculiar problems.

What problem are we trying to solve

The gates were simply too bulky and relatively too expensive for the value it offered.

The gates also had a relatively high maintenance cost! It became very unsightly when it fails and detaches from the rest of its members.

Its constant failure stems from its movement in a haphazard manner due to its design to swing in arcs in its bid to open.

How did we fix this?

In 2012 during the visit of the chief executive officer to one of the retail sites that was scheduled to be commissioned, he challenged the team to replace the bogus entrance gates. He wondered why despite a lot of the novel efforts put into designing contemporary fueling stations, we never bothered to redesign the gates.

Well I picked up the challenge.

I started off making a few phone calls to an old friend of mine in the United Kingdom. I asked that he shares as many designs for entrance and exit gates in London or adjoining cities that we could quickly adopt.

I was looking for a quick and probably lazy win.

When we spoke a few days later, I realized my folly. The peculiar challenges we were having in Nigeria were by no means a reflection of the global designs for fuel stations.

I would have to think this idea through. Since I had outlined the peculiar issues with the present gate, it was clear that whatever innovation must address the problems must yet be aesthetically pleasing.

On my trip to Port Harcourt to inspect some projects, we were caught up in a traffic congestion at a police checkpoint. I then had ample time to notice this frail looking plastic collapsible barrier. See a similar type in the picture.

And I had the light-bulb moment. Suddenly I couldn’t wait to work something out using steel bars and grooves to allow for a seamless movement.

Unlike the previous design, this new gate design moves in a linear direction (along a straight line). It is therefore not impacted by the slope of the entrance and exit ramp.

The metal components used in the design of the gates were much lighter than the previous designs and created a unique design in its movement during opening and closing. The gates can literally be pushed open with a single finger along metal frame on the pavement placed along its movement route despite using smaller roller wheels!

I had one of the leading local steel fabricators make a prototype design. We had the design reviewed twice and then produced, and then installed at one retail fuel station in Abuja for observation. The gates went 2 years straight without any maintenance cost! Amazing!

The new gate design was promptly adopted and fabricated and installed at all the new retail sites I supervised in the following years.

It didn’t take long for the industry to catch in on the trend. To my chagrin several versions of the gates were installed by rival companies and other independent marketers in and around Lagos. The pace of adoption was pretty much very quick and the ease of its use must have driven its acceptance.

Now when I drive through parts of the country, I see the collapsible gates adorning the entrance and exit perimeters of many retail sites big or small, new and old.

I get the satisfaction that this new gate solves a unique problem in the industry. It contributes in no small way to the reduced maintenance cost and provides value for money.

Did I mention that the new gate is also relatively cheaper than the old one.

In conclusion, the thinking and application of innovative techniques can change any part of our fuel station design if we decide to be deliberate in our effort.

That is my story!