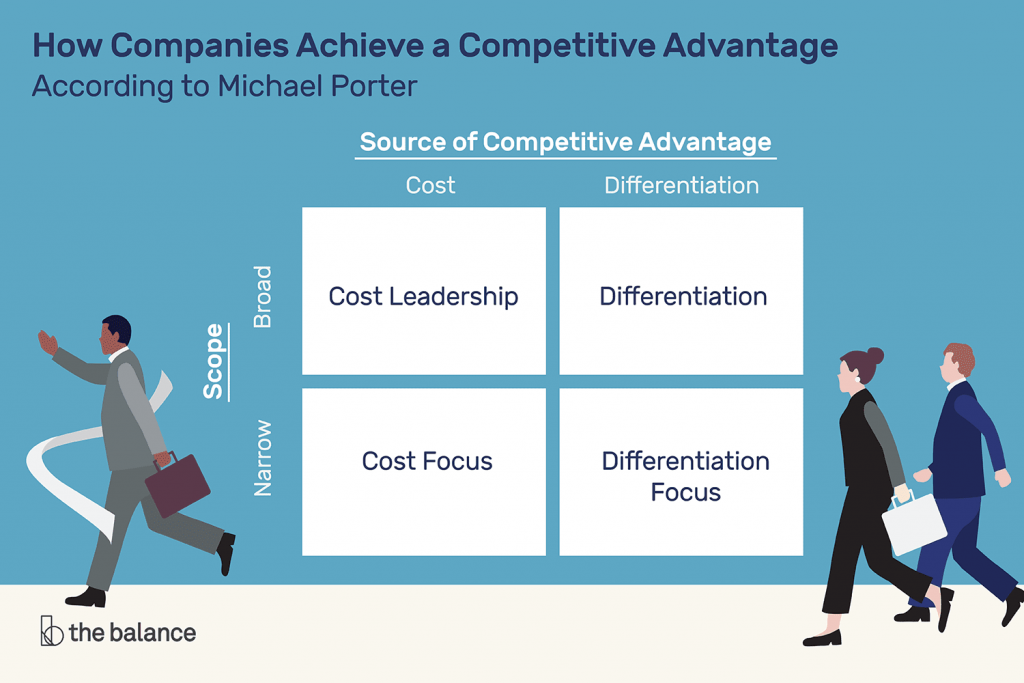 I f you missed the first part of this series, you will find even more useful life tips and nuggets in this article.

A firm’s relative position within its industry determines whether a firm’s profitability is above or below the industry average. A firm that can position itself well may earn high rates of return even though industry structure is unfavorable and the average profitability of the industry is therefore modest.

The fundamental basis of above-average performance in the long run is sustainable competitive advantage.

Though a firm can have a myriad of strengths and weaknesses vis-à-vis its competitors, there are two basic types of competitive advantage a firm can possess: low cost or differentiation.

The significance of any strength or weakness a firm possesses is ultimately a function of its impact on relative cost or differentiation. Cost advantage and differentiation in turn stem from industry structure. They result from a firm’s ability to cope with the five forces better than its rivals.

The two basic types of competitive advantage combined with the scope of activities for which a firm seeks to achieve them lead to three generic strategies for achieving above-average performance in an industry:

The generic strategies are shown in Figure 1–3.

The specific actions required to implement each generic strategy vary widely from industry to industry, as do the feasible generic strategies in a particular industry. While selecting and implementing a generic strategy is far from simple, however, they are the logical routes to competitive advantage that must be probed in any industry.

Cost leadership is perhaps the clearest of the three generic strategies. In it, a firm sets out to become the low-cost producer in its industry.

The firm has a broad scope and serves many industry segments, and may even operate in related industries—the firm’s breadth is often important to its cost advantage. The sources of cost advantage are varied and depend on the structure of the industry.

They may include the pursuit of economies of scale, proprietary technology, preferential access to raw materials, and other factors I will describe in detail in Chapter 3.

If a firm can achieve and sustain overall cost leadership, then it will be an above-average performer in its industry provided it can command prices at or near the industry average.

At equivalent or lower prices than its rivals, a cost leader’s low-cost position translates into higher returns. A cost leader, however, cannot ignore the bases of differentiation. If its product is not perceived as comparable or acceptable by buyers, a cost leader will be forced to discount prices well below competitors’ to gain sales.

This may nullify the benefits of its favorable cost position. Texas Instruments (in watches) and Northwest Airlines (in air transportation) are two low-cost firms that fell into this trap. Texas Instruments could not overcome its disadvantage in differentiation and exited the watch industry.

Northwest Airlines recognized its problem in time, and has instituted efforts to improve marketing, passenger service, and service to travel agents to make its product more comparable to those of its competitors.

The strategic logic of cost leadership usually requires that a firm be the cost leader, not one of several firms vying for this position.

Many firms have made serious strategic errors by failing to recognize this. When there is more than one aspiring cost leader, rivalry among them is usually fierce because every point of market share is viewed as crucial. Unless one firm can gain a cost lead and “persuade” others to abandon their strategies, the consequences for profitability (and long-run industry structure) can be disastrous, as has been the case in a number of petrochemical industries. Thus cost leadership is a strategy particularly dependent on preemption, unless major technological change allows a firm to radically change its cost position.

The second generic strategy is differentiation. In a differentiation strategy, a firm seeks to be unique in its industry along some dimensions that are widely valued by buyers. It selects one or more attributes that many buyers in an industry perceive as important, and uniquely positions itself to meet those needs. It is rewarded for its uniqueness with a premium price.

The means for differentiation are peculiar to each industry. Differentiation can be based on the product itself, the delivery system by which it is sold, the marketing approach, and a broad range of other factors. In construction equipment, for example, Caterpillar Tractor’s differentiation is based on product durability, service, spare parts availability, and an excellent dealer network. In cosmetics, differentiation tends to be based more on product image and the positioning of counters in the stores. I will describe how a firm can create sustainable differentiation in Chapter 4.

A firm that can achieve and sustain differentiation will be an above-average performer in its industry if its price premium exceeds the extra costs incurred in being unique.

The target segments must either have buyers with unusual needs or else the production and delivery system that best serves the target segment must differ from that of other industry segments.

Cost focus exploits differences in cost behavior in some segments, while differentiation focus exploits the special needs of buyers in certain segments. Such differences imply that the segments are poorly served by broadly-targeted competitors who serve them at the same time as they serve others.

The focuser can thus achieve competitive advantage by dedicating itself to the segments exclusively. Breadth of target is clearly a matter of degree, but the essence of focus is the exploitation of a narrow target’s differences from the balance of the industry. Narrow focus in and of itself is not sufficient for above-average performance.